Skip to content
Members! Don't forget to log in to your NATM Member Compass to receive member pricing for the 2023 NATM Convention & Trade Show.

We use cookies and other tracking technologies to improve your browsing experience on our website, to show you personalized content and targeted ads, to analyze our website traffic, and to understand where our visitors are coming from. Learn More.

The dust has finally settled, and 2021 has ushered in a unified Democratic government, with President Joe Biden occupying the White House and Democrats controlling both chambers of Congress, both by the slimmest of margins.

The 117th Congress will be defined by two new and competing dynamics: unified government bringing the opportunity for the Democratic Party to execute an ambitious legislative agenda, in some cases by simple majority votes, while the narrow majorities in both chambers will embolden the bi-partisan center and promote moderation.

The Georgia runoff election victories of Jon Ossoff and Raphael Warnock delivered the 2 seats needed to even the partisan split to 50-50 in the Senate. With the inauguration of President Biden, this means that Vice President Kamala Harris will break all ties on votes in the Senate. Senator Chuck Schumer (D-NY) will ascended to the role of Majority Leader. With the even split, the work of the new Senate will be contingent on power sharing agreements and cooperation with his minority counterpart, something we last experienced in 2001 when the Senate was briefly 50-50.

A shift in the majority has also ushered in new leadership on the Committee level, with Senate Democrats holding Chairman gavels for the first time since 2014. A notable new Committee Chair is Senate Committee on Commerce, Science & Transportation Chairwoman Maria Cantwell (D-WA), who will have jurisdiction over highways, shipping, transportation security, interstate commerce, economic development, and technology. Senator Roger Wicker (R-MS) continues his efforts on the Committee as the Ranking Member.

With the narrowest of possible majorities and a group of moderates anchoring the center such as Senators Joe Manchin (D-WV) and Kyrsten Sinema (D-AZ), the legislative agenda will not skew as far left as some might expect, but it is important to remember that control of the chamber does furnish Leader Schumer with certain procedural advantages that may embolden him – control of floor time and which priorities receive votes, reconciliation measures (which will allow Democrats to pass some big ticket items with a simple majority), the ability to uncoil certain Trump Administration regulations via the Congressional Review Act (another procedural tool that requires only a majority threshold), as well as more leeway to advance President Biden nominees.

On the other side of the Capitol, Nancy Pelosi (D-CA) was re-elected to serve as Speaker of the House for the 117th Congress. A condensed majority, coupled with the voting restrictions of COVID-19, threatened to challenge the Speaker’s fourth run at the gavel, but in the end just 5 members of her caucus voted against her or abstained. Speaker Pelosi will possess the gavel, but election losses have narrowed her ruling majority, creating opportunities for moderate Democrats and frustrating the ambitions of the progressive left. On the Committee level, Rep. Peter DeFazio (D-OR) returns as Chairman of the House Committee on Transportation & Infrastructure, alongside Ranking Member Sam Graves (R-MO).

In addition to changes in leadership and shifts in the governing majority, the new Congress will add over 60 new members to the rank and file. Below is a list of the new members of the 117th Congress. Many of these Members will be joining the Transportation & Infrastructure Committee where they will have a voice on issues important to NATM’s members. With the highway reauthorization expiring in 2021 and continued drumbeats for infrastructure investment, it is expected that President Biden and Congress will seek to make bold decisions in this area. NATM has already begun engaging in these discussions and will continue to promote its legislative agenda.

We encourage NATM members to get involved in the Association’s government affairs outreach, particularly if you see your Member of Congress on the list below and would be willing to invite them, when COVID-19 protocols allow, to tour your facility, meet their constituents, and learn more about the light- and medium-duty trailer manufacturing industry. 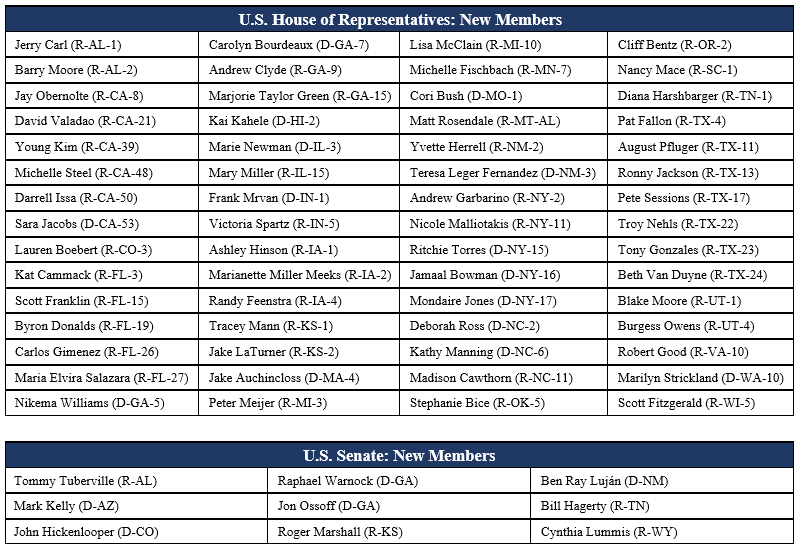 Dennis Potter is a Government Affairs Advisor and Brody Garland is a Government Affairs Analyst at the law and lobbying firm of K&L Gates, where they represent NATM and other clients on legislative, regulatory, policy, and political matters. Mr. Potter can be reached at dennis.potter@klgates.com and Mr. Garland can be reached at brody.garland@klgates.com.

Is Your Company a Member?

If you are an employee of a NATM member company, we invite you to set up an online account to:

The members of NATM invite and encourage you to join! By working together, we can achieve our mission to maintain and enhance our industry as a whole.

All membership applications for NATM must be approved by the NATM member voting group.